Rafael Van der Vaart, born in 1983 the 27 year old started his career as a product of the Ajax youth academy. He made his debut for Ajax in 2000 as a 17 year old, he stayed in the Ajax team for the next 5 years and scored 52 goals in 117 appearances. You could say he was as prolific goalscorer as a midfielder can be, some will argue the level of football is not as high in the Dutch league as it is here in England. He captained the side in his final season at the club in 2004/05.

In 2005 he moved to German side Hamburg, it was a bit of a surprise because he was highly tipped to move to one of the biggest clubs in Europe. Van der Vaart finished his first season with his new club as the teams top scorer, the following year just like Ajax had done, Hamburg gave Rafael the captains armband. Van der Vaart spent 3 years in Germany scoring 29 goals in 74 appearances, again not a bad record.

In the summer of 2008 Van der Vaart got his big move as he signed for Spanish giants Real Madrid to become a new galactico. During his first season with Real he scored his first ever hat-trick, he later fell out with ex Spurs and current Real boss Juande Ramos after the manager said he felt Van der Vaart was more of an impact player, this lead to some top Premiership clubs including Manchester United, Liverpool and Chelsea waiting in the wings should he be transfer listed. The following season in 2009 it was speculated that Rafael would be leaving Real as new manager Manuel Pellegrini told the Dutch midfielder that he did not feature in his current team plans. By this time Real had signed Kaka and Christiano Ronaldo who both play similar roles. He did get his chance in the team following the sales of Robben and Sneijder, following an injury to Kaka he was given a chance in the team once again and proved to be a key player for Real during his spell back in the team, scoring some crucial goals as Real made a push for the La Liga title. Van der Vaart only scored 11 goals in 58 games for Real but you have to remember a lot of his appearances for Real were made from the bench.

Van der Vaart made his international debut for Holland as an 18 year old against Andorra, he has since played in 2 European Championships and 2 World Cups for Holland. His international goal scoring record isn’t too bad either, 16 goals in 83 caps, he also featured in this year’s World Cup Final against Spain. 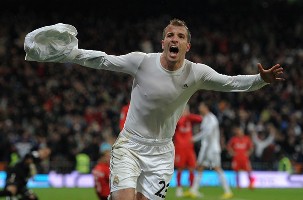 Well you know the rest, on 31st August 2010 Rafael Van der Vaart signed for Tottenham Hotspur on transfer deadline day in a move worth around £8million. Personally, having watched this guy for a lot of his career I would consider that a bargain. Real Madrid had no plans to include him in their squad which meant they were desperate to offload him. Their loss is our gain, I don’t doubt his ability for a minute, he was behind Kaka, Ronaldo and Ozil at Real who are arguably some of the best players around. So we have gained a player who has played at the highest level and brings with him bags of experience. Martin Jol once claimed that Van der Vaart was one of the best playmakers in the world. Rafael will bring something special to Tottenham and I am talking about his fit wife.

I look forward to seeing this guy in a Spurs shirt, yeah we might not have really needed another midfielder but when you can pick up a bargain like this which can only improve the team then why not? He will add goals to our midfield which will mask the fact we lack a world class striker, it means that not signing a top striker at the moment isn’t as important as it was because he will be getting himself in the box like Lampard does. For any doubters, watch the video below at the type of quality this guy has.