We were linked with Ashley Young all summer long but with the Departure of Martin O’Neill from Aston Villa it left any hopes of a deal shattered. Tottenham were hoping to do a swap deal for the England winger but just a few days before the start of the new campaign manager Martin O’Neill stepped down. 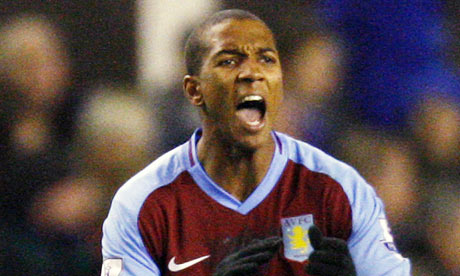 Spurs are now tipped to go back in January with an offer of a cash plus player deal, likely involving Robbie Keane and Jermaine Jenas. Daniel Levy and Harry Redknapp have both admired Ashley Young for a long time and if a deal could be completed would inject even more pace to the Spurs midfield. With Lennon on the right and Young on the left, that is enough to frighten any team in the league.

Levy is willing to match the players wages of around £65,000 a week if he can offload Keane and Jenas. Young was said to be interested because of Champions League football but come January hopefully we are still in it, however I think Tottenham are the more likely club to finish top 4 again this season.

So come January after a relatively quiet summer for Tottenham untill the final day maybe we will get down to business early, if there are any problem areas in the team then it will be highlighted and hopefully ammended in the January transfer window. A move for Ashley Young only adds fuel to the speculation that Harry would like to have Bale as his permanent left back.

It’s a bit early on to say there is any truth in this but it wouldn’t surprise me if we did go back for Young, a lot can change between now and January.

Nobody will yet know the full reasons behind Martin O’neill walking away from Villa just days before the start of the new season but early reports are that it has to do with Villa planning to sell Ashley Young to Tottenham without O’Neill’s consent. It seems Martin had resigned himself to losing Milner to  City due to their formidable spending power but selling Young too was just too much for him to take.

It’s no secret that Harry has been an admirer of Ashley Young for a while and had flirted with the idea of bringing him to the Lane. Most places are reporting that the reason behind O’Neill stepping down at Aston Villa is because of the sale of James Milner and a lack of funds available for him to spend.

It was a couple of radio stations that seem to think that the real reason that tipped Martin over the edge was that Villa were also planning to sell Ashley Young to Spurs, Talksport in particular. This would seem to make more sense than O’Neill leaving because of James Milner because the Milner saga was hardly a suprise and Martin knew Villa couldn’t compete with City’s spending power and would have to sell, but it seems that if there is any truth in tha Ashely Young story that the Villa board pushed him just one step too far.

So what do you guys think, any truth in this? Could Ashley Young be on his way to Spurs and do we really need him?

A few sources are today throwing around the talk of a possible deal to bring Villa wide man Ashley Young to the Lane …..

But what about the cost ?

With Young apparently valued by the Villa board at £30m – yes, you read that right £30m, Harry Redknapp is reportedly preparing to offer 3 players in exchange for the England hopeful’s services.

Jermaine Jenas, Robbie Keane and David Bentley are the players in question, some may be happy to see the back of all 3 at the moment, and we’d be lucky to get £20m  for them individually in the current financial climate, but the question is ……. Is Ashley Young of equivalent value to all 3 put together?

I personally would love to see Young in a Spurs shirt come August 14th, lining up against Man City for the opening Prem fixture, but my opinion is that he’s worth nearer the £15-20m mark ?.?.?

Jenas, Keane and Bentley are all good players in their own rights and to be honest, I’d like to see Bentley given more time at the club. But if Harry were to strike a deal involving Keane and Jenas then I’d be happy ….. both players have probably done their best work in the lilywhite shirt and could probably do with a fresh start elsewhere to prevent their careers from petering out.

If the rumours turn out to have an ounce of truth in them ….. would you welcome this particular deal?

Let us know in the comments box below …….

End Of The Line - Woodgate Set To Retire ?

The knee injury which has sidelined Jonathon Woodgate since November last year looks set to result in the end of the former England man’s career.

After Harry Redknapp said last week that July was a “make or break” month for his injury prone centre half, he now appears set to omit Woody from his squad of 25 players to be handed to the Premier League by 1st September.

Once that deadline has passed, Woodgate would not be eligible for squad registration for league matches again until the transfer window reopens in January.

He was back running again at the start of pre season training and there looked to be hope, but he has spent most sessions working away from the rest of the squad and Redknapp said last night: “Jonathan will not be fit for the start of the season. “He’s in a position where he can’t train or kick a ball.”

With Champions League football on the way, Redknapp will want a squad of players who he considers fit and reliable and unfortunately he will not see Woodgate in that bracket.

With no sign of a return in the near future, you would expect an announcement from the club or player in the coming weeks.

Whatever he decides, I’m sure all supporters will wish him well.

Meanwhile, Harry Redknapp has distanced himself from reports linking the club with a bid for Manchester City target James Milner.

Redknapp was thought to be monitoring City’s progress with the player but when asked by Sky Sports News, he said :

“Anybody would like James Milner, he’s an outstanding young player, but he’d be way out of our depth.”

Redknapp was also linked with Milner’s Villa teammate Ashley Young at the weekend but quashed that speculation  aswell by saying :

“He is a good player but he belongs to Villa. We’ve not made any enquiries for him at all.”

Following all the furore surrounding his handling of the proposed James Milner to Man City move last week, Villa boss Martin O’Neill is set for more problems during this transfer window as Spurs boss Harry Redknapp is supposedly plotting a move for star winger Ashley Young.

Many sources are currently claiming that White Hart Lane chiefs see Young as the perfect man to pair up with Gareth Bale on the Spurs left next season as the club head into their debut Champions League campaign.

No fees have been mentioned as yet, but with recent talk linking both Robbie Keane and Jermain Jenas with moves to Villa Park you would imagine Harry Redknapp would be looking to involve either one or even both players in any prospective deal.

Would you be pleased to see Ashley Young in a Spurs shirt come August? Is he the answer to our left sided conundrum? Who else do you feel Harry and Levy should be looking at before the new campaign gets underway?

As usual, all comments are welcome in the box below ……
ALSO ….. Remember to sign up to the Triffic Tottenham forum to chat with fellow Spurs about the subjects that matter to you and to see all the action from the forthcoming season LIVE on your PC for FREE !!!!!