He showed why he should have been in the England team in the first place, he’s Jermain Defoe. It’s about time, Defoe might not touch the ball a lot during the 90mins but what he does give is the constant threat. The opposition defenders always have to be on guard when up against Defoe because of his blistering pace. Defoe will play off the shoulder and cause any defence havoc.

Up next it’s the Germans, sure we can play Heskey…. if we want to go out. We all know Rooney likes playing up front with Heskey, but why should Rooney get to decide who he plays with when Defoe is more likely to get a goal than both of them put together?. For reasons I can’t understand, Heskey seems to be in front of Peter Crouch in the pecking order. I’ve heard people say this is because Crouch doesn’t deliver agaisnt the big teams, well thats because he always gets dropped even though his goal to game record speaks for itself, and can you seriously tell me that Heskey delivers in any game?. Seriously there is more chance of a goal if he put Rob Green up front. Today agaisnt Slovenia he Capello brought Heskey on again and it looked like he had been told to help the back four defend, if that was the case why the hell didn’t he just bring Dawson on? I can’t understand for the life of me what is so special with Emile Heskey, can somebody help me out with that one?.

Anyway I was much impressed with the England performance and attitude today, the lads kept going for goal untill the final whistle. To me the formation was the main reason because if the manager sets out a positive formation the players think positive. I feel sorry for the England team because the pressure this country and the press put on these boys shoulders is second to none. I am confident the players will up their game agaisnt the Germans in the last 16, let’s just hope they practice penalties, and if it does come down to penalties once again, would Defoe fancy having a go?. He told Sky Sports News  “definately” but us Spurs fans know all too well that Defoe although always confident from the spot,doesn’t have the greatest record.

Back to Defoe, I am so chuffed for him, he has deserved this moment, after being dropped at the last minute for Euro 2004 and World Cup 2006, he must have thought he would never get his chance. To his credit he has kept doing the business for Tottenham and Portsmouth and scored a few important goals for England along the way. He is prone to a dip in form every few months but drop him at your peril because whenever he is on the pitch he is a goal threat and the opposing defenders know that, he causes them to have to play deep through the threat of his pace.

This sunday will see the first England V Germany meeting in a major finals since Euro 2000 where England won 1-0 to an Alan Shearer goal. The rivalry will flair up once again. On paper England have some superstars and probably the better team but games aren’t played on paper unfortunatley. The Germans have so much pedigree when it comes to major tournaments and are no mugs, in fact you can probably count on the fact that they are a organized disciplined unit than England are. It will prove to be a mouth watering encounter. The England team have come under fire recently, however if we knock the Germans out all will be forgiven. One thing is for sure, it will be criminal not to start Defoe having just watched his press conference on Sky Sports News. He looks like a man oozing with confidence and he is no doubt hungry for more goals 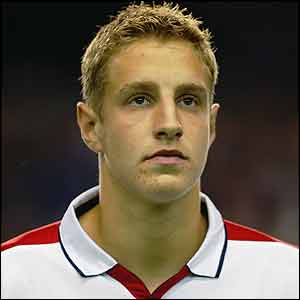 Well I thought Tottenham centre half Michael Dawson was probably the most unluckiest player to miss out on Capello’s final 23 for the World Cup. He had a solid season and lost out on his place for the likes of Upson and Carragher who got in on reputation alone. However today justice has been served but fate played a cruel trick on England captain Rio Ferdinand as he was today ruled out through injury. This is terrible news for England but for me as a Tottenham fan I was delighted to learn that Dawson had now been called back into the England team. Now I personally would hope it was any other defender except Ferdinand but to see Dawson get what he should have righfully had in the first place is great.

Fabio Capello now has a major headache, surely if he has any sense he will put Ledley at the heart of the defense now Rio is out, but I have that sickening feeling he will pick Carragher. If England don’t opt for King and Terry,King and Dawson or at the very least King and Carragher as partnerships, they have no chance. At all costs I would keep Upson out of the team, I think he is a good defender but not better than any of the others and certainly is no world cup winner. Lets hope Capello knows his stuff and earns his Spurs by putting his faith in Dawson if Ledley has to miss one or two of the games through his knee injury. I know that dawson wouldn’t let our nation down because I see him week in week out and know that he is just as good as John Terry based on this season. It’s time for the England team to stop being picked on reputation and to be picked on form alone, players have to stop living off their past reputations and earn all their caps.

Michael Dawson and Ledley King , all us Spurs fans know you can do it, lets just hope for the sake of our nation you are given the chance.

Before anyone jumps to any conclusions, let me make it clear that I fully intend on supporting the Three Lions all summer long. Furthermore, Michael Carrick and Ledley King rank quite high on my list of favorite players. After yesterday’s announcement of England’s World Cup squad, however, I couldn’t help but have a bitter taste in my mouth.

When Fabio Capello took over the England hotseat, he made it clear that he’d pick players based on form. The Italian made it a point that he’d select the players that were at the peak of their powers on the club scene, prompting players like David Beckham to forgo their summer vacations simply to prove their worthiness to Capello.

In the end, Capello picked the 23 men that he initially had in mind (a fact that even he admitted). The fact that Jamie Carragher was even asked to reverse his international retirement proves that Capello had his sights set on certain players from day one – regardless of how slow they are as they reach the end of their careers and regardless of how poorly they performed for their clubs this season (remember, Carragher’s Liverpool containing the likes of Steven Gerrard, Fernando Torres, and Pepe Reina couldn’t even qualify for the Champions League).

In addition to Carragher, the inclusion of Matthew Upson proves that club form was no determining factor. Upson was included at the expense of one of the Premier League’s most consistent top performers: Michael Dawson. Dawson, even more so than the often-injured Ledley King, was instrumental in Tottenham’s historic run into the top four.

Even in midfield, it was all about names and not about form. The biggest surprise was that Fabio Capello sent two of his trickiest and fastest wingers packing: Adam Johnson and Theo Walcott. Who remained in their place? None other than Manchester City benchwarmer – and Adam Johnson’s club backup – Shaun Wright-Phillips. The wee man couldn’t hold down a spot at the club level, but Fabio Capello opted for him over two stars just entering the brightest years of their careers.

Up top, the most heinous crime committed by Capello is his decision to leave Darren Bent at home this summer. The Sunderland striker was by far the most in form striker all season long (taking Wayne Rooney’s late season injury problems into account), and has been banging in the Premier League goals for a few seasons in a row now – all while playing for a mediocre Sunderland side. Bent deserves his place in South Africa undoubtedly, but Capello oddly enough opted for yet another player who doesn’t even start at the club level: Emile Heskey of Aston Villa. Far too many Villa fans have even pondered how their slow and aging striker found his name on the final 23.

Don’t get me wrong: I’d be absolutely delighted if England win the World Cup. Like many other fans of the Three Lions, I wasn’t even alive in 1966 to watch Sir Bobby Charlton and company take the world by storm. In fact, the effects of that England team will be felt for many years to come, and when I met Sir Bobby outside of Old Trafford two years ago you could just feel his legend status.

Fabio Capello and his team of 23 now  have a chance to cement their own spots in English folklore, and while I disagree with some of the squad choices, I fully intend on throwing all of my support behind the heroes representing England this summer. England needs more than a prayer and a little bit of luck – they need their millions of fans worldwide to provide continued unwavering support. Tottenham will still have 4 players representing them in the England team in Defoe,King,Lennon and Crouch. There were doubts over King would make the cut due to his fitness but personally I dont think his place was ever in question, every England manager has noticed the talents of Ledley and worked hard to get him into the England set up and when he has played he never let them down. For the likes of Huddlestone and Dawson, maybe not this time but i’m sure they have plenty of caps to come in the future.