Please Note : This is not true neither factual and is intended purely as a joke

In the summer of 2001 Sol Campbell went from club legend status to hate figure, when he took advantage of the Bosman ruling and walked away from White Hart Lane and done the unthinkable ……. he signed for Ar5ena1 !!!

Now, after 9 years of believing the lies about the reason for his departure, we here at Triffic Tottenham can exclusively reveal the TRUTH behind his decision ……. 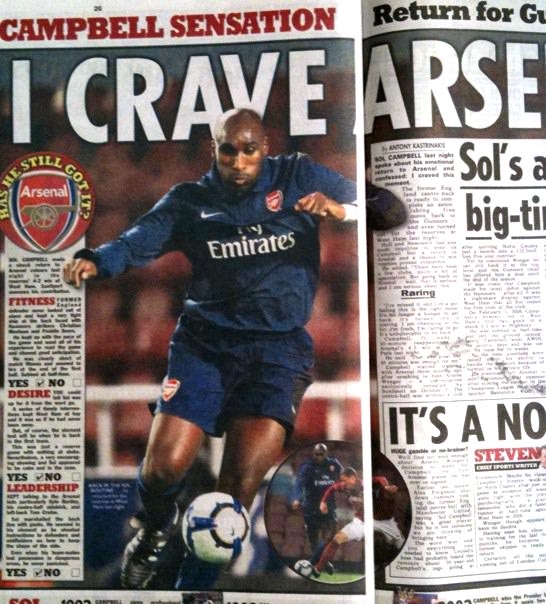 We suspected as much !!! - Campbell comes clean almost a decade down the line !

Well, there you have it ! For years you’ve sung the chants at the Lane, (you know the ones!) and now you’ve been proved right …..he does go in for a little brown love !

Obviously he found no volunteers in the White Hart Lane dressing room when he asked for a willing participant in such acts, so he had to move elsewhere to get his jollies off ……. with Highbury the being the nations hotspot for those types of shenanigans at that time !

After years of anger towards the player, I’m sure all Spurs fans upon hearing this news will accept and forgive Sol for his actions. None of that goes on at the lane, so that lot down the road was his only logical option.

I think I speak on behalf of all Spurs fans when I say ……. We forgive you Sol.