Harry Redknapp, that’s why. No not in appointing him but by stalling his contract talks, as soon as we finished 4th they should have tied him down to a new contract as soon as possible but they didn’t and now it could turn out to be a huge mistake.

England’s awful display at the World Cup has cast doubt over the future of Fabio Capello. Now we have heard the rumors that Redknapp and Hodgson are the front runners for the job. Both managers have stated that they would not be able to turn down the chance to manage their country and with both managers heading towards the back end of their careers can you really blame them?.

Spurs failed to sit down with Harry and offer him a deal to keep him at the the club, so when you consider how much compensation would be due to Capello if he was sacked, how appealing does getting Redknapp in on the cheap look for the FA. With only 1 year left on his contract the FA could take Harry and pay us peanuts, however if we had been sensible and tied him down to a 4 year contract and the worse was to happen then we could expect some big compensation.

Now Harry knows there is possibly a chance to manage England just around the corner do you really think he will want to start talks over a new contract now? because I don’t. I can’t for the life of me figure out why the man was not offered a new contract, he has performed a miracle at the club and we have the audacity to mess him about by making him wait for a new contract when he has stated he loves it at Spurs and wants to stay.

I for one will be praying that Capello keeps his job for the sake of us Spurs fans or we could face losing our “Arry” on the cheap and then having to find the cash to buy out the contract of our next manager. Now don’t panic just yet, this is just speculation but if the FA make their move then Harry would take the job and get only pennies in return. The Football Association must be rubbing their hands together at the mouthwatering prospect at getting a highly respected English manager for what might as well be a free transfer. Levy hasn’t done much wrong recently but this could prove to be his biggest blunder to date, what were they thinking, what more does Harry have to do to be made to feel wanted by the club? So take note people, before you start shouting “Capello out” be careful what you wish for.

Tottenham manager Harry Redknapp and Fulham boss Roy Hodgson will be part of BBC Sport’s studio line-up during the 2010 World Cup with summer. 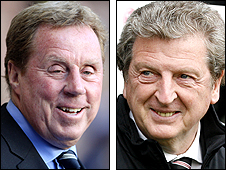 Redknapp was named Barclays Premier League Manager of the Season this year, with Hodgson taking the League Managers Association award.

“(We will) have on board two of the most respected English managers to add to an already great line-up.”

I am looking forward to watching the World Cup even more now, Harry and Roy both 2 top managers and will always tell it how it is. It’s good to see they both had a great season and are now getting offers to be pundits.