Step up Ledley King, as we all know the England and Tottenham center half is likely to be out for the next 3 weeks. How does this rate on the luck scale? well when you consider Ledley last played a major tournament for England in Euro 2004 but had to fly home during the group stages after an impressive performance agaisnt France due to the birth of his first child (Yes it was a bit awful timing but it showed Ledley to be the true decent,honest and loyal man he is). I’d say his luck is off the scale. 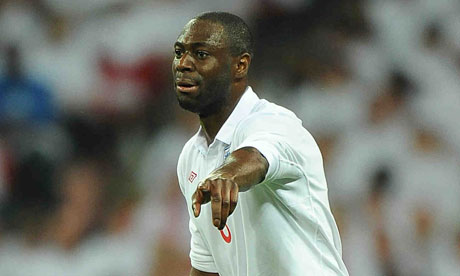 Since 2004, Ledley has been plagued by his mysterious knee injury which prevents him training with the rest of the team. After each match his knee swells up and he is in pain for a few days. On average now if other injuries permit he can manage 1 game a week for Tottenham. The most amazing part of this story is the fact that Ledley is still one of the best defenders in the Premier League, he was instrumental in Tottenham finishing in the top 4 for the first time this season.

King picked up a groin injury agaisnt USA in Englands World Cup opening match, a scan has revealed a tear which is likley to mean 3 weeks out for Ledley and probably the end of his tournament. He has had the worst luck in football from a personal point of view in the last 5 years, god only knows how good he could have been if he wasn’t cursed with a crocked knee. Harry Redknapp himself even says it would be scary to think just how good this guy could be because he is one of the best defenders around and doesn’t even train. It defies all logic.

It is a shame but I am glad his talent has been seen by Capello and he got his chance, I just hope that Dawson is the man to replace him although somehow I doubt it. All Spurs fans know just how good King and Dawson are and could do a job for England. The only thing that bugs me is all the non Tottenham fans coming out and saying this just proves that Ledley should never have gone to South Africa. Do they even know that this is a completely new injury that King has picked up? do they even care? No!, they just jump on the Ledley King bandwagon. Let me tell you that if Ledders had managed to keep himself fit all his career I would bet my life he would have been England captain, he has the attitude,ability and character.

When it comes to football I declare Ledley King the unluckiest man in recent times, but maybe it is a blessing in disguise because if he had kept fit would he still be a Tottenham player? my heart says yes but who knows what big offers would have come in for him.

I’ve rated Giovani dos Santos for god knows how long, when we signed him I was as excited as the rest of you, and so cheap at around the £4mil mark. It looks likely that he will be on his way out in the summer, but is it just me or does anyone else still see something special in this kid?, do you have the same fears that I do that if we sold him it would come back to haunt us. The way he runs with the ball reminds me of a younger Ronaldinho as he was once dubbed.

I keep asking myself, everytime I watch Mexico play he seems to be the best player on the field or at the very least the mexico team. Today I watch the opening World Cup 2010 game, South Africa V Mexico and once again Gio was the main man. Gio looked to be the one creating things and pulling the strings, it looked as though everything Mexico created came through him. I watched England V Mexico the other day and again Gio dos Santos has a decent game agaisnt good opposition.

Now I keep going over in my headas to why a player who is the star for his national side and played for Barcelona at such a young age and was destined to go on to great things can slowly be fading away in a Tottenham side. It seems to me the majority of the Tottenham supporters would like to see this boy give more of a chance in the team, next season would be ideal to give him some more time because of the fixture pile up. Now what really scares me is that Harry is missing a trick with this young lad and if we let him go we might just end up regretting it (I think we will). If it wasn’t for the fact that Ekotto got injured in January we would probably be saying au revoir to Gareth Bale this summer too, but as fate had it we got to see exactly why we paid out £10mil for Bale and now he is in the heart of the team. What concerns me is thats exactly what it was “fate” and not good managment that saved us from the disaster of letting Gareth Bale leave the lane. It scares me that it was only the fact we had no other left back and that Bale took his chance rather than the good managment of Harry to put him in. This is why I would love to see dos Santos given more of a chance because from what I have seen of him for Tottenham and Mexico he definately posesses ability and with the right coaching I believe could still live up to his potential. I would like to see him given some games next season because we will need depth in the squad due to the Champions League fixtures (if we qualify).

I would really like your opinions on this one guys, am I alone or do you as i suspect share my view on Gio? I know I will be down the bookies putting a £10 bet on each Mexico game for Gio to score the first goal, that’s how much confidence I have in the boy.